Compilers are programs that read in one (source) language, and translate them into another (target) language.

A compiler is often designed in a number of phases:

To contrast this with interpreters, interpreters take as input the program and the data, and produce an output. The interpreters do their computation “online”.

Cousins of the Compiler

The Economy of Programming Languages

Why are there so many programming languages? Application domains have distinctive/conflicting needs. For example, in scientific computing, there needs to be good support for FP, arrays and parallelism. Julia is a good example of a language designed for scientific computing. In systems programming, we require fine control over resources, and satisfy certain real-time constraints. Languages like C are suited for these applications.

Programmer training is the dominant cost for a programming language. It is difficult to modify a language, but easy to start a new one.

The lexical analyzer reads input characters of the source program, group characters into lexemes, and outputs a sequence of tokens to the parser.

Since the lexical analyzer needs to split splits into token classes, it must be specify the set of strings that belongs into a token class. To do so, we use regular languages.

We use context-free grammars to specify the syntax of a language.

A grammar for arithmetic expressions can be constructed from a table showing the associativity and precedence of operators.

Two different non-terminals can be constructed for the two levels of precedence:

Consists of a set of procedures, one for each non-terminal. The construction of both top-down and bottom-up parsers is aided by two functions: first and follow.

The parse tree for an input string is constructed beginning from the leaves (bottom) and working up towards the root (the top).

LR grammars can be parsed with shift-reduce parsers.

One can think of bottom-up parsing as the process of “reducing” a string \(w\) to the start symbol of the grammar. At each reduction, a specific substring matching the body of a production is replaced by the nonterminal at the head of the production.

Bottom-up parsing during a left-to-right scan of the input constructs a right-most derivation in reverse.

A stack holds grammar symbols and an inptu buffer holds the rest of the string to be parsed. During a left-to-right scan of the input string, the parser shifts zero or more input symbols onto the stack, until it is ready to reduce a string \(\beta\) of grammar symbols onto the stack. It then reduces \(\beta\) to the head of the appropriate production. The parser repeats this cycle until it has detected an error, or until the stack contains the start symbol and the input is empty.

The use of a stack in shift-reduce parsing is because the handle will always eventually appear on top of the stack, and never inside.

These grammars are not in the \(LR(k)\) class of grammars.

The main downside to this is that construction of a LR parser is tedious by hand.

Syntax-directed translation is done by attaching rules or program fragments to productions in a grammar. e.g. consider

We can translate expr by attaching a semantic action within the production body:

The position of the semantic action determines the order in which the action is executed.

The most general approach to SDT is to construct a parse tree or syntax tree, and compute the values of attributes by visiting the nodes of the tree. In most cases, SDT can be performed without explicit construction of the tree.

S-attributed translations (synthesized) is a smaller class that can be performed easily in connection with a bottom-up parse.

There are 2 kinds of attributes for non-terminals:

Evaluating an SDD at the nodes of a parse tree

The dependency graph characterizes the possible orders in which we can evaluate the attributes at various nodes in the parse tree.

An SDD is S-attributed if every attribute is synthesized. In this scenario, we can evaluate attributes in any bottom-up order, for example using post-order traversal of the parse tree.

In L-attributed SDDs, dependency-graph edges can only go from left-to-right, and not right-to-left. This means that each attribute must be either:

We can control side effects in SDDs by:

Semantic rules executed for their side effects, such as printing, are treade as the definitions of dummy synthesized attributes associated with the head of the production. The modified SDD produces the same translation under any topological sort, since the statement is executed at the end.

The environment deals out layout and allocation of storage locations in the source program, linkages between procedure and mechanisms for passing parameters, as well as interfaces to the operating system, I/O devices and other programs.

An example of the run-time representation of an object program in the logical address space is shown below: 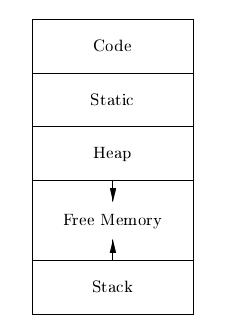 The operating system maps logical addresses into physical addresses. Run-time storage typically comes in blocks of contiguous bytes, where a byte is the smallest unit of addressable memory.

To maximize utilization of space at run-time, the stack and heap are at opposite ends of the remainder of the address space. In practice, the stack grows towards lower addresses, and the heap towards higher, but here we assume the opposite so we can use positive offsets for notational convenience.

An activation record may contain:

temporary values
arising from evaluation of expressions etc.
local data
belonging to the procedure whose actiavtion record this is
saved machine status
return address (program counter), contents of registers that must be restored when return occurs
access link
locate data needed by the called procedure found elsewhere (e.g. in another activation record)
control link
pointing to the activation record of the caller
return value
space must be allocated for the return value of the called function, if any
parameters
Parameters used by the calling procedures, these are however often placed in registers instead of the stack.

Calling sequences consists of code that allocates an activation record on the stack and enters information into its fields. A return sequence similarly contains code that restores the state of the machine so the calling procedure can continue its execution after the call.

It is desirable to put as much of the calling sequence into the callee as possible, but the callee cannot know everything. This reduces the amount of code generated. These are some guiding principles:

Variable-Length data of the Stack

A common scheme that works for dynamically sized arrays is to have a pointer to the array stored on the stack. This pointer are known offsets from the top-of-stack pointer, so the target code can access array elements through these pointers.

A Lex compiler takes a Lex source program, and outputs a program. This program is compiled in its source language (originally C, jFlex for Java). The result program takes an input stream as input, and produces a sequence of tokens as output.

A lex program has the following form:

Each pattern is a regular expression, which may use the definitions of the declaration section. The actions are fragments of code.

The auxiliary functions section contains used in these actions.

Icon by Laymik from The Noun Project. Website built with ♥ with Org-mode, Hugo, and Netlify.